Editor’s note: This story is part of a popular profile series Fall 2022 graduates.

Jayla Johnson always knew she wanted to pursue a career in entertainment and make movies. 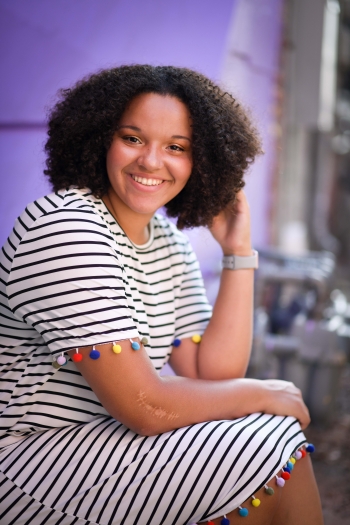 “I used to walk around with my VHS tapes in my arms, ready to put them in my player,” he says.

“Growing up, movies were my escape from the fears of the world. As a child I had severe anxiety and the only thing that helped me deal with it was to turn on a happy movie. My mom knew this, and she knew what movie would comfort me and put a smile on my face, whether I had seen it before or not. Growing up and going through these challenges helped me appreciate the filmmaking process and understand how the stories that helped me as a child are made.”

Born and raised in a small town in Wyoming, Johnson said she decided to start pursuing her passion early, earning her degree before graduating high school.

“I always liked school and wanted to be successful in life, so I worked toward an associate’s degree at the same time during my last two years of high school.”

Johnson earned an associate’s degree in communications multimedia, which he says was the closest he came to starting his filmmaking practice.

“I learned very quickly that a career in film/television is a long road, so I decided to attend high school and I wanted to start this journey as soon as possible to achieve my goals,” he said.

Johnson continued her career at Arizona State University, where she is graduating this fall from Herberger Institute of Design and Art’s Sydney Poitier New American Film School with a BFA in Film and Media Production, as well as a degree in Entrepreneurship from the WP Carey School of Business.

“My ultimate career goal is to be a film producer or creative executive,” he said. “I came to ASU wanting to be a writer, but I quickly learned that I loved the creative side and the business side of making movies and TV shows. As a producer/creative executive, I want to develop and create stories that are not only interesting but also meaningful to filmmakers and audiences.”

“I love how a passionate story like this, made by an even more passionate filmmaker, can change someone’s life, and I can’t do anything else.”

While at ASU, Johnson served as a leader in many student organizations and produced a short film with film students. He received the New American University Provost Award and the Sun Devil State Award Scholarship.

Q: What was something you learned in class or anything else while at ASU that surprised you or changed your perspective?

Answer: Aside from learning about the technical side of film and the business side of things, I believe the most effective lesson I learned at ASU was how to get out of your comfort zone. It’s not something that’s taught in class, but it’s something that’s very important in becoming an adult. Before coming to ASU, I was shy, quiet, and nervous, but when I came to the Tempe campus, I knew I wouldn’t be successful if I continued like that. So I started doing things I never did before, contacting people, attending club meetings, and now I can say that by doing this, I was on the right path to achieving my goals and met some wonderful and memorable people. way. I am fortunate to learn more and more about myself and I would never be where I am today if I hadn’t stepped out of my personal comfort zone.

Q: Why did you choose ASU?

A: I know a lot of people choose ASU because of the great weather, but I personally didn’t consider the weather when choosing a college. Since I had a family in Arizona, I applied to several schools and planned to reserve ASU; However, once I started researching each of my options, I realized that ASU had exactly what I was looking for. Just scrolling through the website revealed many academic and professional opportunities that excited me. And there was news that ASU was the 50th film school in the nation, which I thought was pretty good!

Q: Which professor taught you the most important lesson while at ASU?

A: Professor Chris Lamont was the first professor I had a one-on-one interview with at ASU. I met with him about academic and career goals and left in tears. This meeting was the biggest lesson I learned, and I believe it was the driving force behind my decisions going forward. He taught me that the film industry is really hard – it’s that simple. He told me to work for it every day and learn the industry inside and out. It was a lot of information for my freshman year, so it brought tears to my eyes, but it was the biggest motivation to push me forward and become the hardest worker in the program.

Q: What’s the best advice you can give to people in school?

A: Work hard and connect with your peers and teachers. This tip may sound simple, but you’d be surprised how many people don’t do it. As a result of hard work, people will notice and admire what you do professionally and personally. By making connections, you can get friends, gigs, job opportunities, and more. You never know how much of an impact someone will have on your life if you don’t make that initial connection.

Q: What was your favorite place on campus to study, meet friends, or just think about life?

A: My favorite spots were Pringles, the area outside the ASU Art Museum, and the Music Building. There was some shade nearby and the occasional music student could be heard practicing his music, which was a nice environment to study.

Q: What are your plans after graduation?

A: After graduation, I am moving to Los Angeles to pursue a career in film and television. I hope to land an entry-level position at a major production company or talent agency.

Q: If someone gave you $40 million to solve one problem on our planet, what would you solve?

A: I will solve the main problem of garbage pollution. It is a problem that people ignore (and causes) many health problems and animal habitats. It’s scary to think that there’s an island of garbage floating in the ocean right now. Earth is such a beautiful place that humans ignore and neglect, so I want to bring that beauty back to our planet.