It’s no real surprise to learn streaming services like Netflix (NFLX 3.74%) and HBO Max are struggling to add subscribers. The COVID-19 pandemic created a swell of demand that was never going to be sustained, and a significant number of streaming options have surfaced just within the past few years. That’s why worldwide streaming subscription growth is slowing to a crawl now.

The problem of gaining and then retaining streaming customers, however, may be even bigger than it seems on the surface.

That’s the takeaway from new data reported by streaming market researcher Antenna. September’s churn rate for the industry reached its second-highest level in years, topped only by September 2021’s surge linked to the timing of the pandemic itself. Not even the venerable Netflix — which has historically boasted the best subscriber attraction and retention rates in the business — is spared.

Shareholders of any streaming company may want to dramatically temper their expectations. Things are about to get rough.

All told, the major streaming platforms like Netflix, Walt Disney‘s (DIS 0.74%) Disney+ and Hulu, and Warner Bros. Discovery‘s (WBD 2.02%) HBO Max and Discovery+ added (net) 24.2 million worldwide customers last quarter. That’s up from Q2’s count of 21.2 million, but only slightly, and well below the industry’s average growth since early 2020 in the wake of the pandemic.

The slowdown at least partially points to sheer market saturation. 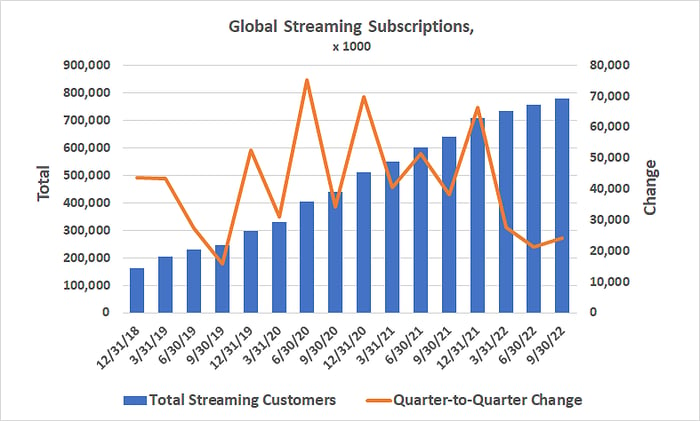 However, the slowdown is also far more nuanced than mere saturation. Churn is on the rise across the board, so much so that the entire streaming industry should be concerned.

In layman’s terms, churn is a comparison of the total number of customers that sign up for a service compared to how many consumers cancel that service during a particular time frame.

What the net-gain figure doesn’t tell you that churn does, though, is that a record-breaking 32 million US consumers canceled their streaming service in Q3. This attrition was simply offset by the addition of 37.2 million subscribers. The figures translate into a churn rate of 5.8% for the month of September, extending sequential churn growth in July and August. 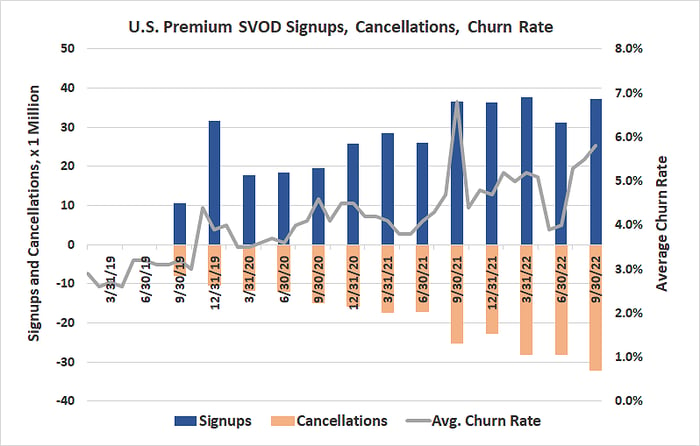 Data source: Antenna. Signup and cancellation data is in millions.

This same trend is evident outside of the United States.

So what? In and of itself, it doesn’t necessarily matter how net subscriber growth is achieved as long as it is achieved. Increasing churn does raise a red flag, however, since it indicates a growing struggle to convince consumers to test drive a streaming service and then continue paying for it.

And as noted above, not even Netflix is ​​immune to the trend. Its churn rate through the first nine months of the year stands at 3.5%, up from last year’s 2% and 2020’s figure of 1.9%. While it still sports the lowest churn rate in the business, like most of its peers, churn is a growing problem for the streaming powerhouse.

The import of rising churn rates is exactly what it seems like it should be: a hint that streaming companies are struggling to win over and then keep subscribers interested.

Ultimately though, it means these companies may have to spend more on marketing, or more on content, or both.

That’s easier said than done. Take Walt Disney as an example. Disney’s streaming operations logged a record-breaking loss of nearly $1.5 billion last quarter despite record-breaking revenue of $4.9 billion. The media giant has been forced to spend heavily on programming and promotions to draw the crowd it wants. The company says it will be cutting costs going forward, and at the same time will be raising ad-free streaming prices in conjunction with the launch of a lower-cost, ad-supported version of Disney+. It remains to be seen, however, when or even if the company will be able to find the right balance between content spending, pricing, marketing, and advertising interruptions.

Netflix is ​​trying a similar tack. In November, it debuted a low-cost, ad-supported version of its popular streaming service in an effort to reignite subscriber growth — and therefore revenue growth — without necessarily expanding its content budget. This also remains to be seen to what extent it will help, however. In a sea of ​​similarly priced, ad-supported alternatives, consumers may still find it easy to cancel their Netflix service and then sign up again a few months later when the content library is updated.

Or maybe those customers won’t sign up again at all. Netflix’s growing churn rate suggests this is what’s already happening now that so many other streaming options are available.

Keep your expectations in check

Is this a death knell for the streaming business? No, the industry will survive.

It won’t thrive in its current form, though.

While more scale (in terms of customer counts, as well as in terms of bigger, higher-priced streaming services) will help, it may still not help enough to make all of these providers as profitable as investors would like them to be. The streaming business is brutally competitive, and even if synergies stemming from consolidation are eventually found, marketing and promotional costs are apt to continue soaring as these companies compete for customers.

Disney may find it can’t simply cull spending in search of streaming profits, but not just Disney. Netflix is ​​also seeing its customer growth slowdown coincide with less aggressive marketing spending. Other players like Warner Bros. Discovery and Paramount are likely running into the same headwind now that streaming services have been commoditized.

The bottom line is: Keep your expectations in check. The streaming business doesn’t work like it used to, when competition was minimal and profits weren’t the point. None of these stocks are the must-haves they were just a few quarters back now that consumers have more choices than they could ever effectively utilize. It’s a particular worry for Netflix, however, because it’s so limited in the number of ways it can monetize its content.